After the “Summer of Migration“: Practices of Citizenship as Urban Commons – Summary

On Friday, November 4,  2016 Jochen Becker (metrozones), Bettina Bauerfeind (Campus Metropolis) and Arwa Aladin (Refugee Academy) discussed the topic of citizenship as an urban commons. Moderated by Markus Kip and Martin Schwegmann, the discussion confronted the challenge of envisioning models and practices of citizenship allowing for undocumented migrants to access to services such as health, education, jobs and housing.

Becker stressed the importance of concrete and spatial interventions in order to create situations for interaction between the majority and minority populations. He further reminded the audience of the productive struggles in the context of citizenship in Berlin in 2013, around the Oranienplatz refugee camp and the Gerhard Hauptmann School, both in Kreuzberg.

„The struggle for the improvement of refugees’ living conditions and their possibilities to participate in urban live have to be understood as an act of commoning.“

These struggles seemed to have at least the potential that they could have led to a more fundamental change in refugees’ living conditions and legal status. However, it seems that today we are far from that situation. According to Jochen Becker, the struggle for the improvement of refugees’ living conditions and their possibilities to participate in urban live have to be understood as an act of commoning. The challenge is to bring these protests and activities to broader strata of society. 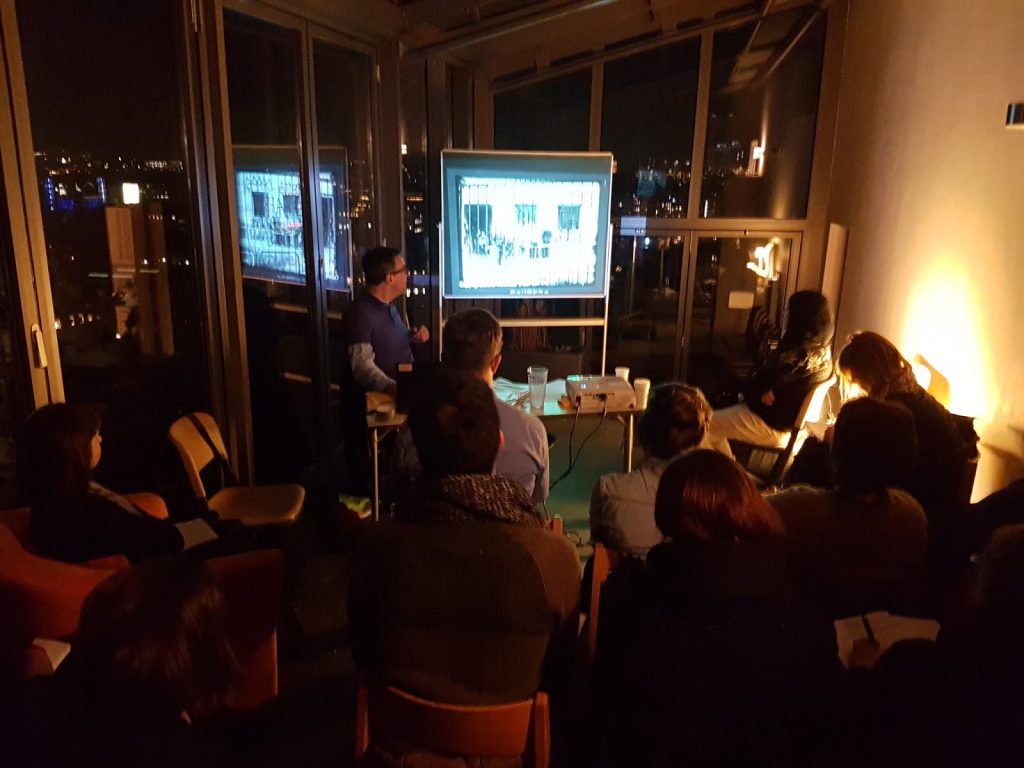 Bettina Bauerfeind explaines the work of the initiative Campus Cosmopolis, which is an initiative of old and new Berliners that wants to create a center for autonomous and communal living and learning in the middle of Berlin. One goal is to allow residents to stay as long as possible in Berlin, in order to get a better chance of becoming a legal resident in Germany.

Arwa Aladin from the Refugee Academy points out that the different ways in which migrants from different countries are treated by authorities, undermine solidarity among them. The residency status is of utmost importance to any refugee. „If I could only work, than I could take care about my own problems“ says Arwa, an IT professor from Iraq, who struggles for permits to continue working in her field in Germany. The Refugee Academy seeks to offer a space for refugees to mutually support and educated each other, from language proficiency to dealing with authorities.

„Does activism supporting people with insecure status only cures the symptom or actually addresses the underlying root causes of illegalization?“

Moderator Martin Schwegmann (MitOst, Berlin) poses the question, whether the activism to support people with insecure status only cures the symptom or actually addresses the underlying root causes of illegalization? The panel stresses the great difficulty of those directly affected to become and stay politicized in order to bring about lasting change for the once in similar conditions. Therefor it needs a strong solidary movement across sectors, that systematically works on creating precedents that show an alternative to current practices of dealing with migration and refugees in Europe.

„It needs brave and committed people, both civil society actors and politicians who want to make a difference.“

The bottom line is, it needs brave and committed people, both civil society actors and politicians who want to make a difference, especially in times of growing xenophobia and right wing political agitation. The experience from Kreuzberg in 2013 shows as well, that rights can be claimed effectively also from below!. Even when only having temporary impact, it created a memory to inspire new struggles.